After my adventure at Bosque del Apache, I took off the next day (February 26th) to check out White
Sands National Monument in Alamogordo new Mexico. I arrived at 8:30 AM and since the Visitor Center doesn’t open until 9:00 AM, I drove along Dune Drive to check out the dunes. I discovered two of the four hiking areas, (Playa Trail and Dunes Life Nature Trail) were closed to visitors due to work being done in those areas. The Drive is only eight miles long so I checked out the scenery along the road and found that most of the dunes were being walked on and many people were sledding down the dunes. I decided the big trail at the end of the Drive, Alkali Trail, would probably be the best place to photograph during the end of the day. I would have to schedule my photography so that I could be out of the park when it closes at 6:30 PM.

The Alkali Trail is 4.6 miles round trip and is a bit strenuous walking up and down the dunes but it is spectacular as there are very few people along the trail. was extemely windy on this day and was told that it normally is at this time of year. Since I felt this was my first trip and it was exploratory I only took one lens, my 24 – 120 zoom lens and did not take a tripod. The landscape is spectacular and during the time 4:30 to 6:00 PM there were many changes in the light with the sun going down. From bright blue skies: 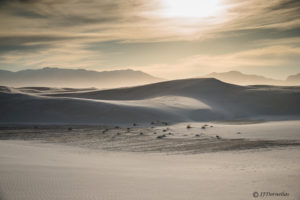 I would definitely come back again and focus on the Alkali Trail, bring a tripod and more than one lens. This is by far the trail to take as it is far more picturesque  and I believe that sunrise must be well worth being here for.