I have spent the majority of the winter traveling and photographing the rugged Oregon coast. The weather has not been at its best for a majority of the time and I sometimes find myself wishing we could swap some days with Santa Fe, New Mexico so we could  give them a couple of our rainy days for a couple of their sunny days. Be that as it may it has been very interesting winter. Being from the east coast with long white sandy beaches, the pacific coast here in Oregon is very rocky, rough and cold. I haven’t been able figured out yet why many of the beaches here are cluttered with driftwood logs and tree limbs it makes the beaches look ugly.

One very interesting coastal area for me was in Newport Oregon while attending a Photography Club conference. They had a scheduled photo excursion for sunrise to an area called Yaquina Head with a lighthouse and a beach filled with smooth, shiny black rocks and not much sand. This area is a large nesting area for many of the native birds. It is very rugged with huge clusters of rocks out in the water as you can see below. The only thing missing was the sun.

This Lighthouse image gives you an idea of what the beach is like and it was tough navigating over the rocks which were wet and slippery.

We also had a sunset tour to the Yaquina Bay bridge which again lacked sun but made for some interesting images of the bridge. 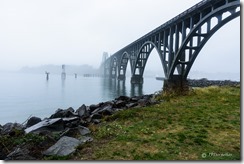 Another very  interesting area that is near Newport is Cape Perpetua which is well known for the huge waves that come crashing over the rocks and if you are not careful you can very easily get drenched or worse, get dumped into the cold ocean if you are not watching for the incoming swells. 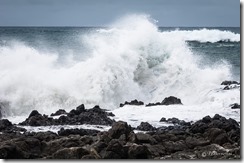 While the weather is still mostly cloudy and rainy I will continue focusing on the Oregon Coast. When its later in the spring I am hoping to get to Washington to photograph in Olympic and Mt Rainier National Parks.