I have now relocated to Eugene Oregon and it has opened up an entirely new world for my photography. The abundance of green and access to the Oregon coast provides scenery that is significantly different from New Mexico.

I spent the first two months at my new residence settling in and exploring nearby areas for photographic opportunities. It will probably take several more months to get my bearings and scope out scenic areas for potential photographic trips. At this point I have been to three coastal areas, two waterfalls and Crater Lake National Park.

To provide an idea what the nearby Oregon area looks like, I would like to share some photographs from my recent explorations of some areas that are fairly close to my location in Eugene. These photographs represent exploration photos which will improve significantly over the next year when I take advantage of the light from the golden hours (sunrise & sunset) and I can seek out the most advantages locations to photograph the great sites of Oregon from.

I have spent the most time on the Oregon coast as it is very different from the California coast. My first trip was to Heceta State Park which has one of the many lighthouses along the coast. 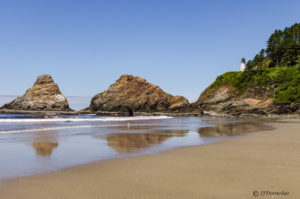 I then went to Cape Kiwanda with the huge “Haystack” rock sitting out in the water.

A trip to Bandon Beach made me feel as if I had just entered into  a scene from Planet of the Apes with many large rocks out in the Ocean and on the beach. 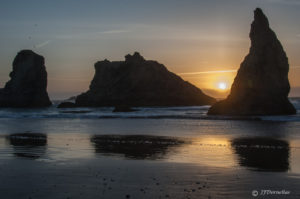 Finally, No images of Oregon would be complete without a photograph of Crater Lake which is spectacular.

My next focus will be Fall foliage which will be sometime in September and October. I will be back at that time to share images of the West Coast foliage.